Well, I guess we can go home now because I can’t imagine anything topping our visit to Tiger Kingdom today.

We rode our scooters about 10 kilometers north of town to spend 840 baht and about 30 minutes petting and cuddling with tigers. They have four different sized tigers you can hang out with: smallest (2-3 months), small (6 months), medium (12 months), and big (18 months). The way they set up the packages, we opted to visit the small and big tigers. I’m secretly wishing we had paid to see the smallest ones too, but oh well.

Tiger Kingdom breeds these cats, producing one to two litters a month, and then raises them by human hand.

They advertise that the animals are not drugged, and after being there and interacting with about 10 different tigers, I believe them. Just standing outside the cages I could feel the respect each cat had for all the trainers.

Each cage had about five or six tigers wandering around or sleeping, and the same amount of trainers (or tour guides, really) walking small groups of tourists from tiger to tiger.

We entered the small tiger cage first, which was about 1000 square feet, and met our guide Peng. He was incredibly friendly and knowledgeable, having a degree in animal science from Chiang Mai University. He brought us to the first tiger and instructed Nick to approach from behind, never the front. Approach slowly and make no sudden moves or sudden loud noises. Never to touch their faces, heads, or front paws. And never encourage or insight playfulness. He said we should pet the tigers firmly, that they don’t like gentle touch (we were told the same thing about the elephants). 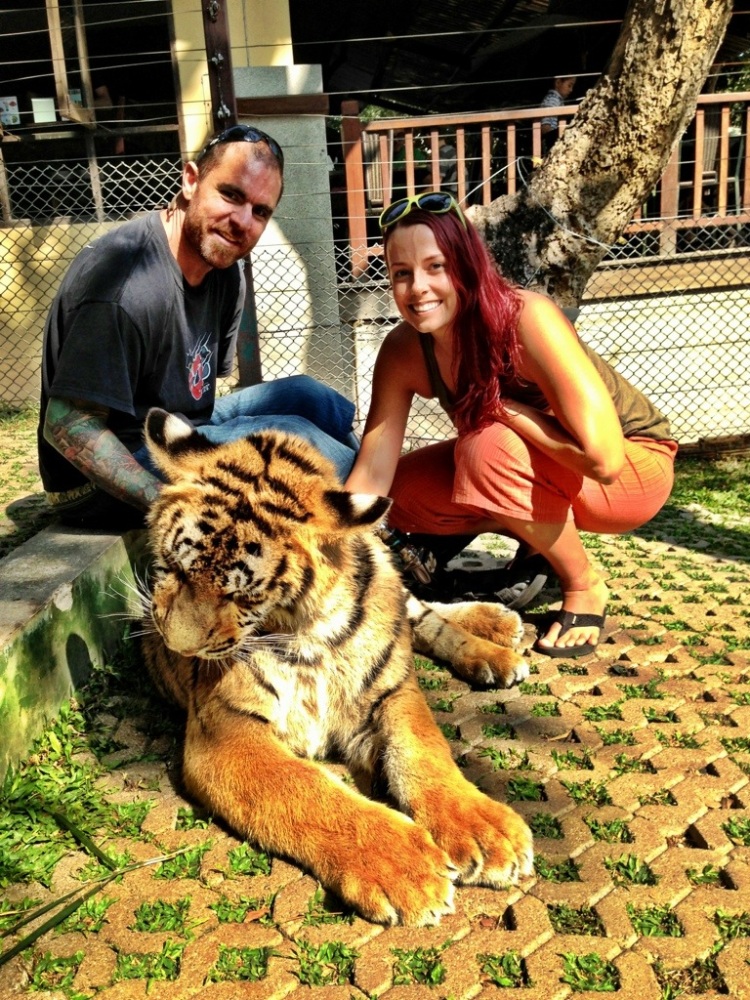 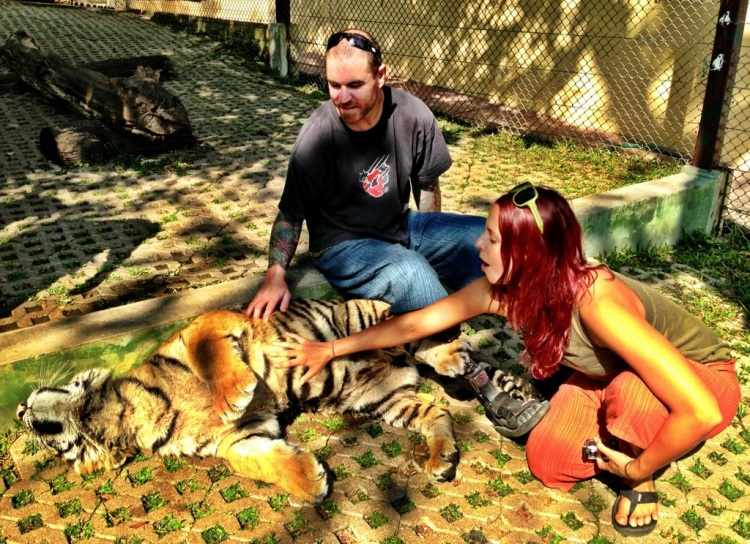 The trainers spent half the time entertaining us, taking our picture, and telling us about the tigers, and the other half of the time monitoring and correcting the tigers behavior (which I obviously appreciated). If they turned their belly and head toward us, the trainer nudged them to turn back. If they became too interested in us, they nudged the tigers head away or distracted them with a “tiger toy” made of a long bamboo stick with bunches of grass at the end. They would use the toy the same way we would use one with a house cat. I found it interesting and cute that tigers are so easily entertained and become fixated on a toy the exact same way. I’ve also heard that some people who are allergic to house cats have had the same allergic reaction when visiting these tigers. See, they’re just cats, only bigger. Nothing to be afraid of! 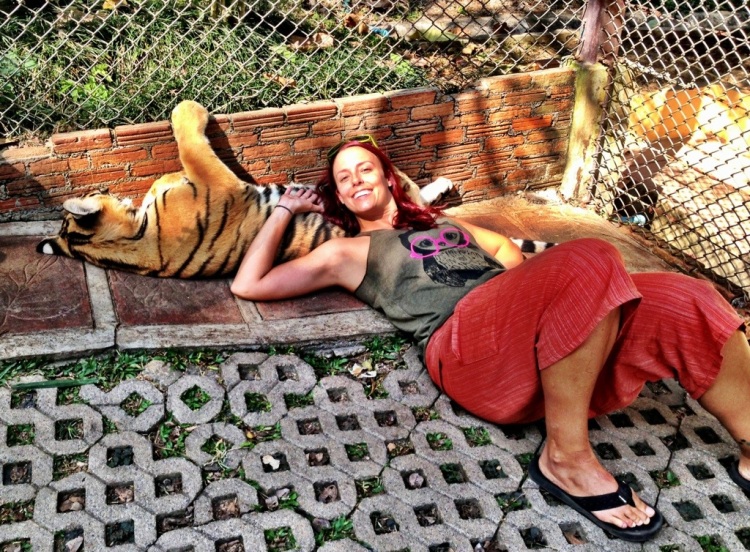 We got to lay with the tigers, using their hips as pillows. We cuddled and pet them. Nick kept trying to get closer and closer to their ears, but the trainer was quick to correct and tell Nick to stay away from their heads. But Nick did get to feel one of the small tigers tongues. Who can say that? 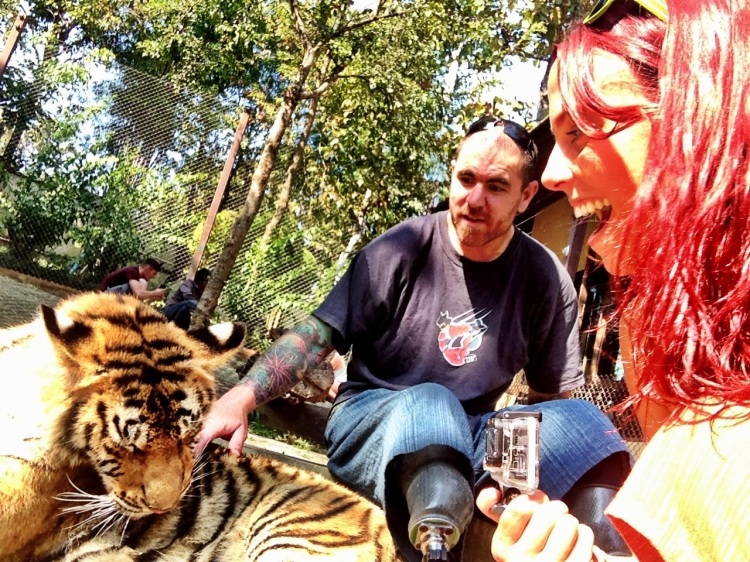 The tiger was licking his coat, and Nick put his hand in the licking path. He said the tongue was like a strong muscle, wrapped in sand paper. And wet.

Most of the small tigers were trying to nap while we were there, except a few who were wandering around trying to stir up trouble with the trainers by pouncing and playing with the ones who were sleeping. Nick had one come up behind him and try to wrestle with the tiger he was laying on. The trainer quickly stopped it and a different trainer came along to tend to the rogue tiger and calm him down. He was just being a playful, curious young animal, but they discourage that when the tourists are there. Duh. It’s a 130 pound curious cat with growing teeth and claws. Claws they sand down once a week. At six months old though, their claws aren’t yet fully developed and neither are their teeth. Still, I wouldn’t want to find out how it feels to be gnawed on by them.

After about fifteen minutes of hanging out with four or five small tigers, we left the cage and waited for 20 minutes to enter the big tiger cage. While we waited, we watched one of the big tigers sit on the ledge of the pool inside the cage and pee and poo in it. They are trained to go in the water like that (think: Jinxy cat pooping in the toilet in the movie Meet the Parents). He even made a poop face when squeezing it out. I had no idea that tigers make a poop face too! 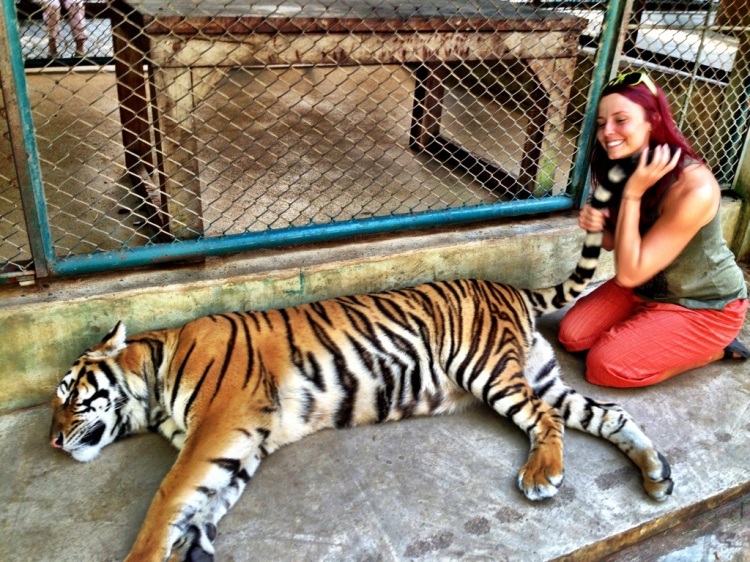 They called our number and we entered the cage with our new guide Louie. I could tell he loves his job. He loved taking pictures of us and playing with the big cats.

At one point he instructed me to sit behind one and not move. Then he tickled its ear with the big cat toy. The tiger sprung up so fast, focused and ready to play. Of course this served for a great photo op!

The big ones were my favorite. At 18 months old, they’re already 500 pounds and over 10 feet long from tail to nose. When one was lifting his front legs up onto the cage and standing tall trying to chase the toy, he was easily 8-9 feet tall.

Their paws are enormous. 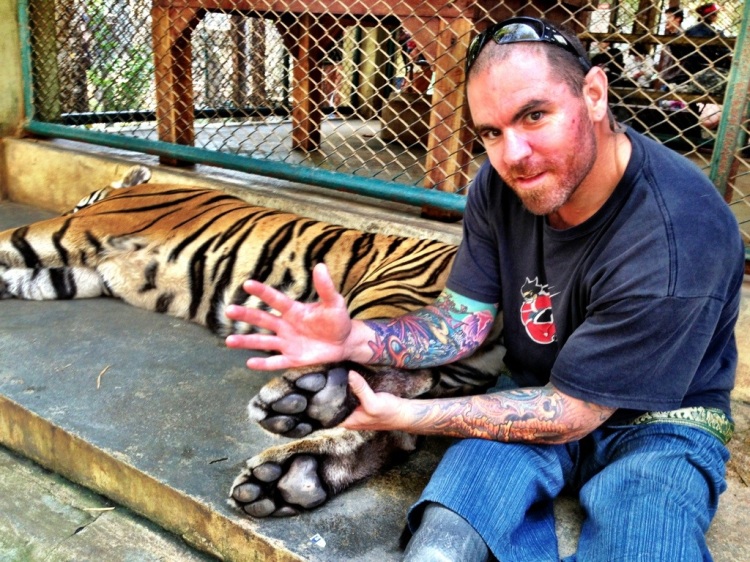 Their teeth are enormous. 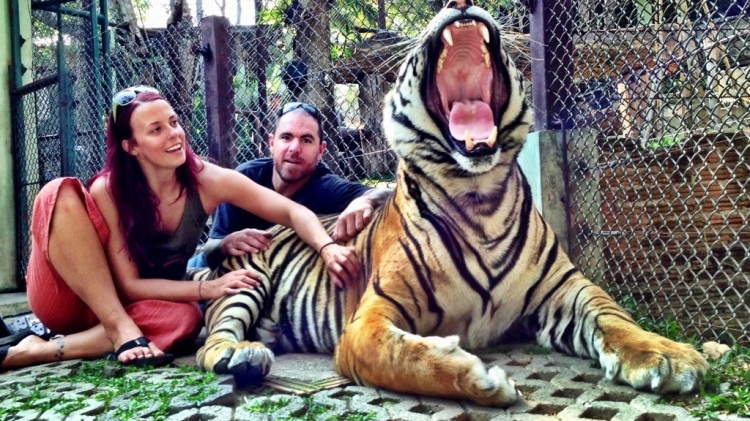 In general, they are enormous creatures. I really had no idea they were so big because I had never been so close.

When I got to spoon with the the biggest tiger, I realized just how blessed I am to be here with Nick. That we could share this experience together. Just two and a half years ago a doctor told me he would never walk again. And here we are, riding elephants and cuddling with tigers in Thailand. Totarrry unberrrrievabrre. 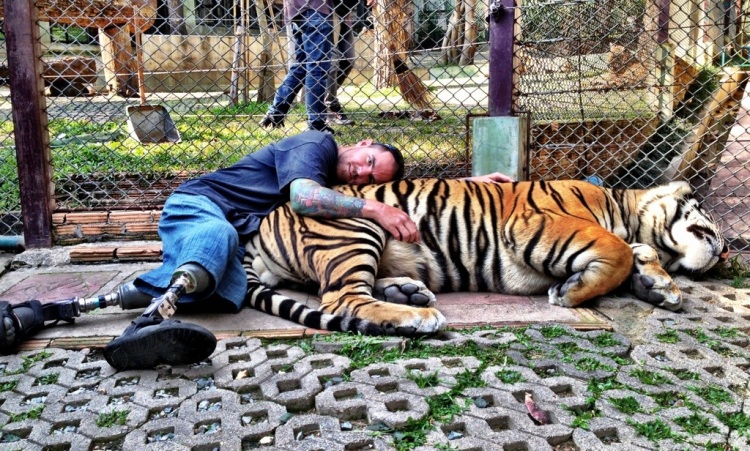